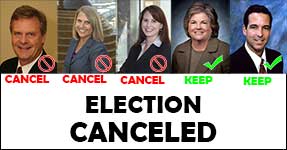 Today at 1:00pm, in a special City Council meeting, in an almost empty City Hall, City Council Majority voted to cancel the November City Council election. Although no challengers have yet come to the table, the vote eliminated the opportunity for San Marcos citizens to run as a write-in candidate. (The write-in candidates registration period is 9/8/14 – 10/21/14, so it will be forever unknown whether or not a challenger would have surfaced).

A majority of City Council was up for re-election this November, Mayor Jim Desmond, Councilmember Kristal Jabara and Councilmember Chris Orlando, but today’s vote locked them in to another 4 years. San Marcos City Council has a deadline set by the Registrar of Voters of August 21, 2014 to tell them whether or not they are going to hold an election, and if so, for which seats. So far the city knows of ZERO people interested in running… so they have to weigh the expense of running a no-contest election vs the potential loss of sense-of-fairness/transparency if they cancel the election.

Despite the fact that write-in candidates have from 9/8/14 – 10/21/14 to actually file as a write in candidate, City Council could vote tomorrow, 8/20/14,  to eliminate that possibility. (It goes back to whether to save money, or keep things fair-ish).

The bottom line is that if anybody is seriously considering running, you better let the City know ASAP. The City Council meeting starts at 1pm tomorrow. Contact Phil Scollick asap if you are considering running.  [email protected],  760-744-1050 ext. 3105