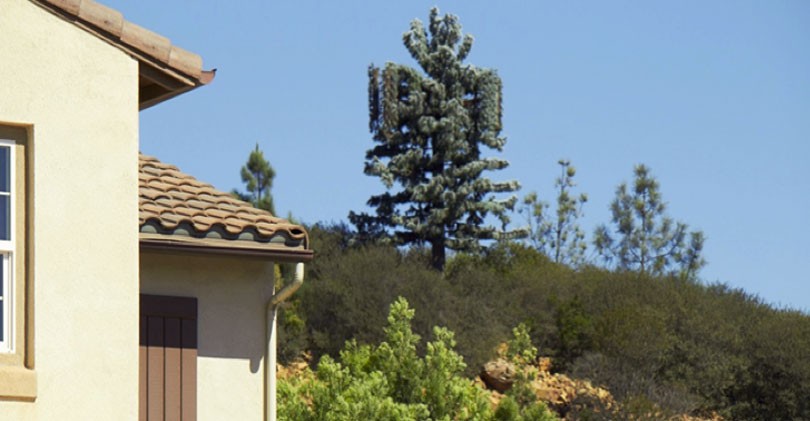 The City Council Hearing to determine the outcome of the Telecommunications Ordinance is 6:00pm, Tuesday, July 22, 2014, at 1 Civic Center Drive.

On June 30, 2014, the San Marcos Planning Commission unanimously voted to recommend that City Council approve the draft revision to the Wireless Telecommunications Facilities Ordinance to further define the City’s rules for cell towers in San Marcos.

The new changes would encourage wireless telecommunications facilities (WTFs) to locate outside residential and other sensitive areas. Camouflaged designs and the use of compact cell facilities would also be promoted. Finally, the revised ordinance would limit the number of WTFs per site and encourage clustering of WTFs with the fewest number of towers to complete a network.

After prompting from City Council late last year, City staff gathered and incorporated public input to craft the new rules. If approved, the revised ordinance would identify how WTF applications are processed. After discussion on the modifications, City Council asked staff to further revise the draft wireless telecommunications facilities ordinance (Chapter 20.465 of the San Marcos Municipal Code) during the January 14, 2014 City Council meeting.

Click here to review the June 30 Planning Commission documents, including the City staff PowerPoint presented during the meeting.

For more information, please contact Principal Planner Karen Brindley in the City’s Planning Division at (760) 744-1050, ext. 3220, [email protected] or visit the development services counter Monday through Thursday (and alternate Fridays) between 7:30 am and 5:30 pm.

The residents of San Elijo Hills/San Marcos have worked hard to preserve the unique character of our community, this should be respected.  Allowing our community character and environment to be degraded by large (macro) cell towers next to our homes and schools is irresponsible government.

The City’s proposed May Cell Tower Ordinance will ruin our community character and create more visual blight. Take San Elijo Hills for example. This ordinance allows three macro cell towers virtually in the back yards of homes on Antilla Way and Orion Way. Why doesn’t the Ordinance provide reasonable distance requirement between such large cell towers and homes? These towers and the failed attempt to camouflage them with trees only adds to the fire threat in what is already designated a severe wildfire area.

These macro cell towers are not necessary for coverage in our community; they provide cell service to Carlsbad, Encinitas and Oceanside at our expense.  This is why they are so profitable for the cell companies.

On a per capita basis, San Marcos already has 19% more cell towers than the rest of the country.  Mayor Desmond, you should protect our community and not the cell company’s profits.  What we need to fill voids left in San Marcos is safe small cell technology, (DAS).   The City ordinance does not mandate this.

DAS antennas are safer and are hardly visible.  These systems do not create visual blight, safety concerns and lower property values and these systems can fill cell phone voids in a fraction of the time a large macro cell tower can be approved and erected.

To have an ordinance that is enforceable and protects San Marcos, it must include:

Strong neighborhoods and communities stand up for each other and demand responsible governance. The City Council must stop this ordinance and demand an ordinance that protects us from Macro Cell Tower visual blight and the associated decrease in property values, community safety and security.

Mayor Desmond, do what you said to the residents and the UT after you approved the second macro cell tower in San Elijo Hills.  Do what is right for San Marcos residents and stand up to the cell companies

Please also reverse your position to not meet with San Marcos residents on the Cell Ordinance.