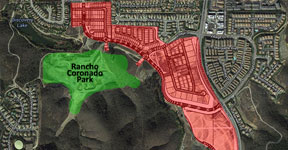 Read the official public notice to learn more and to provide your feedback. Note: If you plan to provide feedback, it must pertain to the U.S. Army Corps of Engineers Evaluation Factors (read more below).

Description of Project (Excerpt from Public Notice)
The 251-acre project proposes grading and construction to develop 52 acres of mixed-use residential consisting of 346 single family detached, single-family detached courtyard, and paired single-family (duplex units) developed in three villages; 17 acres of non-residential mixed use commercial; associated infrastructure improvements, as well as a 35-acre park space, and an approximately 119-acre preserved open space. The project includes relocating an unnamed tributary of San Marcos Creek to the west of the existing location and creating a widened channel bottom and manufactured earthen slopes along both sides. Riparian vegetation is to be installed in the channel bottom; the riparian edge will be planted with coast live oak woodland and the slopes are to be planted with Diegan coastal sage scrub (DCSS) vegetation.

U.S. Army Corps of Engineers Evaluation Factors (Excerpt from Public Notice)
The decision whether to issue a permit will be based on an evaluation of the probable impact including cumulative impacts of the proposed activity on the public interest. That decision will reflect the national concern for both protection and utilization of important resources. The benefit, which reasonably may be expected to accrue from the proposal must be balanced against its reasonably foreseeable detriments. All factors which may be relevant to the proposal will be considered including the cumulative effects thereof. Factors that will be considered include conservation, economics, aesthetics, general environmental concerns, wetlands, cultural values, fish and wildlife values, flood hazards, flood plain values, land use, navigation, shoreline erosion and accretion, recreation, water.