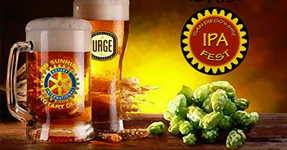 Rancho BEERnardo is San Diego’s “only IPA Beer Tasting event”. The event is a partnership with The Urge Gastropub, who will be providing food.

EVENT DESCRIPTION:
The Rancho Bernardo Sunrise Rotary Club has partnered with URGE Gastropub to bring a new level of professionalism to the festival including an intimate connection to the local craft beer community and a tremendous amount of experience in the food and beverage industry in general. We expect to have as many as fifty different craft beers for tasting and this year we are adding a new feature — San Diego’s only IPA Fest — with a contest to identify the most popular IPA from local entrants.

Last year’s event drew around 150 attendees and this year we intend to drive attendance in excess of 400 individuals. This year’s event will be held at a historical location, Sikes Adobe Farmstead, which is a wonderfully rustic site that has been rebuilt after the Witch Fire in 2007. The Sikes Adobe Society is excited to also be a part of this festival and it is a great opportunity to bring visibility to what was once the original site of the town of Bernardo!

Ticket prices are $30 for 15 tastings and you get to keep your glass. There will be live music and tours of the Sikes Adobe Farmstead. Additionally, the San Dieguito Trail system is right next door if you want to take a hike and North County Westfield Mall is a stone’s throw away.

FOOD: Provided by The Urge Gastropub.