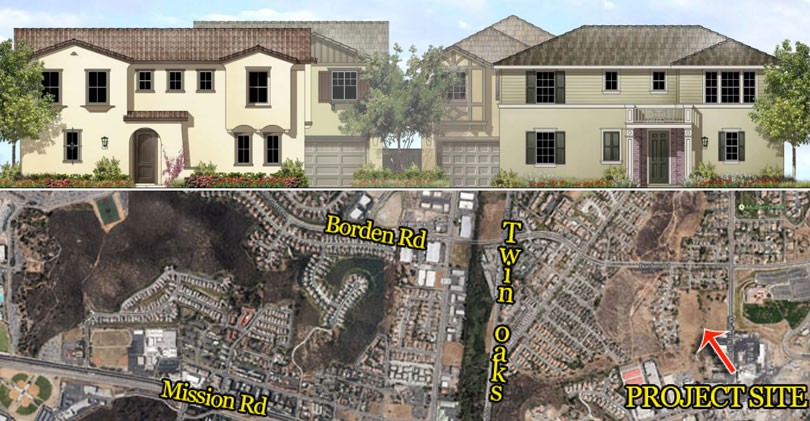 The final approval for the tentative subdivision map of the Mulberry Condominium project is on the January 27th, 2015 City Council Meeting agenda. A new map has been released to give you a better idea of how the project will be laid out. See Here: Excerpt: Industrial Land in San Marcos Sells for $11 Million:  A Los Angeles-based entity of homebuilder D.R. Horton has purchased approximately 8.3 acres of land in San Marcos for $11 million, according to CoStar Group and public data. The land off Mulberry Drive is currently zoned as industrial and is being held for potential development. The seller was listed as Mulberry-SAB LLC. The recorded buyer was listed as D.R. Horton Los Angeles Holding Co. Inc. The homebuilder has its corporate headquarters in Fort Worth, Texas.

Excerpt: Mulberry is a residential development totaling a maximum of 126 dwelling units on 10.01 gross acres, with 9.88 net acres, in the Northern and Eastern portion of San Marcos, Ca. The Mulberry Specific Plan Area is encompassed within one parcel, APN 219-171-04, within the limits of the City of San Marcos, Ca. and will contain a mix of single-family attached condominium, and single family detached condominium units. The Mulberry Specific Plan Area will include private open space areas to complement the residential development.