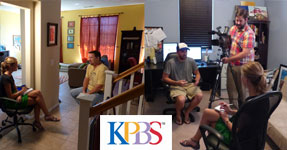 On 8/15/14, KPBS interviewed two local Santa Fe Hills, San Marcos residents regarding a recent string of crime and safety incidents, how Nextdoor™ was used to help, and how it has exposed communication deficiencies and opportunities between the police and the public. In an effort to resolve or eliminate some of these communication deficiencies, Santa Fe Hills residents have urged the San Diego County Sheriff to take closer look at each incident as it was played out on Nextdoor, and to begin using (or at least try) the Nextdoor City Program. To better understand the story and the background of the story, below is a  summary of Nextdoor™, the Nextdoor City Program, and examples of how it has been used during recent crime and safety incidents.

Nextdoor™ is a private social network for specific neighborhoods, apartment buildings or groups of streets. It’s similar to Facebook, but the information discussed is only visible to verified residents of each neighborhood. (All members must use their real names and verify that they indeed live in the neighborhood in order to join).  Because this platform offers the ability to easily communicate to hundreds of actual, verified neighbors, it opens the door to a myriad of opportunities that no other platforms offer. Nextdoor™  has been used to organize neighborhood potlucks, 15-home garage sales, security events, business recommendations, free items, locate lost pets… and most importantly, it’s helped us stay safe and fight crime. Nextdoor is available by web, iPhone and Android devices.

The Nextdoor City Program is an add-on to Nextdoor that allows the local police to send messages to specific Nextdoor neighborhoods, and for residents of those neighborhoods to communicate back. This program is free for the police, free for the public, and is already being leveraged by Police departments across the country, including the San Diego Police Department.

Over the past couple of months there have been several crime and safety incidents in Santa Fe Hills that have prompted the police helicopter, ASTREA, to circle the neighborhood while making announcements over the PA. Because so many active neighbors have joined the Santa Fe Hills Nextdoor™ network, it is the first place that many of us go to whenever we hear ASTREA overhead. Neighbors all across our large 1,850 home neighborhood are able to discuss everything that is happening in real time. This type of active, real-time, neighborhood-exclusive network is relatively new, so the insights learned during these incidents are somewhat eye opening. It’s exposed major areas of improvement and new opportunities regarding communication between the police and the public, that if improved, could keep us safer and help us better fight crime.

For example, during these recent incidents…

(Note: The police are already using tools that could be better leveraged, or enhanced, to reduce some of these communication issues. For example, a more consistent and speedy use of Nixle, a louder PA, and shorter non-emergency line hold times. However, if they took advantage of the free Nextdoor City Program, these communication problems could not only be eliminated, but new opportunities could present themselves.)

Below are three recent incidents to showcase examples of how Nextdoor was used and how it could potentially be used (via the Nextdoor City Program) to improve communication and to keep us safer:

With the new insights learned from Nextdoor™ during these incidents, several residents have suggested that the San Diego County Sheriff and the local San Marcos station give the Nextdoor City Program a try, at least with Santa Fe Hills as a pilot neighborhood. We believe that if used consistently, it will greatly improve communication between the police and the community. So far San Diego County Public Affairs Director, Jan Caldwell, already said NO. However, she refuses to meet, talk on the phone, or even address any of the examples mentioned above.  It is unclear how she reached the NO decision.

However, San Marcos Captain, Scott Ybarrondo, has offered to take a closer look, and to continue a conversation regarding the improvement of public communication in general. To be continued…