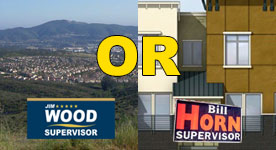 Don’t ignore the primary election believing that nothing of importance is decided. That is not true. There are only two people running for the 5th district seat for County Supervisor; thus the race is decided in June, not in November. Those two candidates are incumbent Bill Horn and challenger Jim Wood.

The unincorporated areas of the County, which include over a hundred acres of coastal sage habitat behind Santa Fe Hills, are managed by the five supervisors – one representing each district. North County is part of the 5th district. The County spent $18 million tax dollars devising a General Plan where all unincorporated areas (much of which is in rural North County) were evaluated for proper zoning and density. A balance between environmental preservation and sustainable urban development was the crux of the plan. For example, the 2020 plan designated the area directly behind Santa Fe Hills an SR10, which means that it should retain a semi-rural character with no more than one house per 10 acres. Many of these unincorporated lands were purchased by speculators – individuals or corporations who buy land as investment with the hope of developing them later and reaping large profits.

The math is simple: higher density allowances = more homes = more profits. You can correctly imagine the backlash from investors whose land was zoned at a lower density than they wanted. These developers, who stand to have their profit margin reduced by the County Plan 2020, have a friend in Bill Horn, and donate to his campaign generously. Beholden to his campaign financiers, Bill Horn rejected the County Plan 2020 and was the only supervisor to do so, It still passed with a 4-1 vote. BUT…. Bill Horn devised an amendment scheme to undo the zoning laws that hindered his donor’s profit margins. Any land owner not happy with their zoning can petition for an exception to a higher density – again, at the cost of taxpayer dollars to re-evaluate all of these. These exceptions will be looked at on a case-by-case basis in 2016 and 2017 – the next term. There are nearly 100 requests (including Mr. Kubba and the Highlands Project directly behind us), and the overwhelming majority of them fall within the 5th district. This is not a coincidence.

If we want to retain some of our open space, our quality of life and some semblance of a rural environment, please get out and vote for Jim Wood during this election cycle. Jim Wood is backed by the Oceanside Firefighter’s Association, every educational association that I know of, and the Endangered Habitats League, who continues to fight Bill Horn on behalf of the environment. Otherwise, we turn into Orange County – wall-to-wall houses and the associated congestion just so the 1% can get richer.

If you want more information, please do not hesitate to ask me or look up Bill Horn and Jim Wood on your own. Google uncovers lots of good stuff, including some of Bill Horn’s more egregious acts…