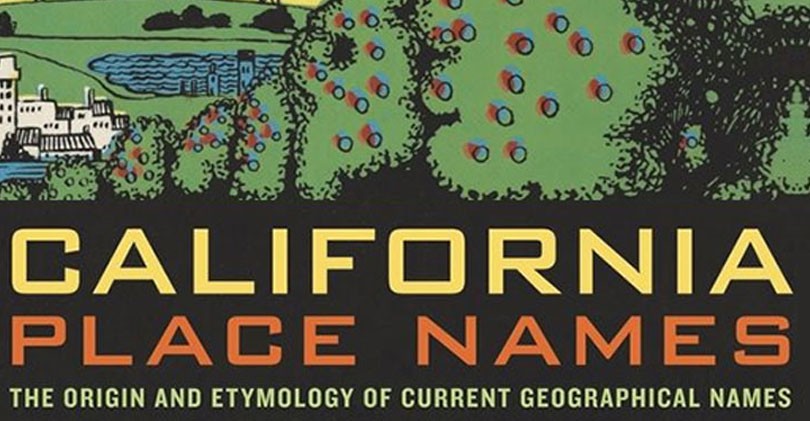 Below are San Diego County-specific excerpts from the book California Place Names: The Origin and Etymology of Current Geographical Names

. This etymology reference book is a super fun way to learn the origins and meanings behind the names of local cities, rivers, lakes, mountains, parks, and more. You can find this book on Amazon or at your local Library.

The list is in alphabetical order, and are all names that should be familiar to those who live in San Diego County. Indented below some of the names are links to more information and/or local examples of where these names are used.

If you’re interested in San Diego County history, make sure to check out our comprehensive list of North County Historical Sites & Museums.

Alta. The adjective means ‘high’ in Spanish and is found in many place names. Most of these, such as Altaville, Alta Loma, Alta Peak, Altamont, were applied in American times.

Anza Desert State Park [San Diego]. Named in 1933 in honor of Juan Bautista de Anza, leader of the famous expedition which crossed the area in 1744.

Arroyo, a-roi’-oh. California has more than 150 streams and gulches which include in their names this word, which means ‘watercourse’.

Auga, ah’-gwa. The Spanish word for water was frequently used as a generic geographical term for springs, creeks, and ponds. The most common, agua caliente, for warm springs, has survived in a number of places. Other adjectives used with the term are amargosa (bitter), dulce (sweet), fria (cold), hedionda (stinking), mansa (gentle), tibia (tepic).

Buena Vista, bway-na vis-ta. The California places were apparently all named because they command a ‘beautiful view’, not to commemorate Taylor’s victory at Buena Vista.

Cal-. The first syllable of California is found in a number of coined border names. Calada, Calvada, Calneva are found along the Nevada line. Calor connects with Oregon (Caldor in El Dorado County, however, stands for California Door Company), Calzona with Arizona, Calexico with Mexico.

California. California, like El Dorado, Quivira, and The Seven Cities of Cibola, was the name of one of the utopias which originated in the imagination of the people after the discovery of America had revived the age-old dream of a paradise on earth. The mythical realm was apparently created by the Spanish writer Montalvo in the romance Las Sergas de Esplandian (the exploits of Esplandian) and endowed with beautiful black Amazons, gold and pearls.

The name is a fanciful creation; none of the many explanations of the meaning of California can be substantiated. Golfo de la California and a Cabo California appear on maps of 1562. In 1569 the name was applied to the peninsula of what is now Lower California; on later maps it was often extended to include the entire Pacific coast. From 1769 to 1846 the area which is approximately included in the present state was termed Alta (upper), or Nueva (new), California.

Camino, ka-mee’-noh. The Spanish word for ‘road’ is repeatedly found in California place names. El Camino Real (the public highway) is the modern highway along the route which connected the various missions along the coast. It is often erroneously interpreted to mean ‘the king’s highway.’

Campo. The word means ‘field’ in Spanish but in California is usually used in the sense of ‘camp’.

Cañada. The Spanish word for valley, unlike the terms canyon and arroyo, has not entered our language. In a few places the name has survived from Spanish times, and American surveyors have used the term for gulches and valleys in Ventura and Santa Barbara counties. On the topographical maps of the War Department the Spanish spelling, cañada, has been restored. The pronunciation varies in different parts of the state: ca’-na-da, ca-na’-da, can-yah’-da.

Carlsbad [San Diego]. Named in 1886 after the famous German Karlsbad in Bohemia because the mineral waters found in the two places are similar in composition.

Casa. The place names which contains the Spanish word for house were probably all applied in American times. Casa Blanca [Riverside] was so named by the Santa Fe in 1887 because a white house could be seen from the station.

Cerro. The Spanish generic term for peak or hill is still used in the southern part of the state for peak: Cerro Alto, Cerro Gordo, Cerro San Luis Obispo, etc.

Cleveland National Forest. Created and named July 1, 1908, for President Cleveland, who had died a week before.

Coches Canyon, koh’-ches [San Diego]. The name, ‘hog canyon,’ is derived from the name of the land grant, ‘Cañada de los Coches, of 1843. The Mexican provincial word coche, for ‘hog’, was applied elsewhere in Spanish California.

Coronado [San Diego]. Named in 1887 after the islands off the coast of Lower California, Los Coronados, which in turn had been named by Sebastián Vizcaino in 1602.

Cuyamaca, kwee-a-mah’-ka [San Diego]. A rancheria, spelled Cullamac and Cuyamac, is mentioned in mission records after 1776. In 1845 the present spelling was used for a land grant and for the mountains. The designation “Queermack,” commonly used for the mountains, seems to indicate that Diegueño India ekwi-amak (rain above) may be connected with the name.

Del Mar [San Diego]. The name was suggested in 1885 by Bayard Taylor’s poem “The Fight of Paso del Mar.”

Descanso, des-kan’-soh [San Diego]. The name, meaning ‘repose’ in Spanish, was applied to the post office in 1880’s. A place named Descanso, across the border in Lower California, was recorded in 1845.

El Cajon, ka-hohn’ [San Diego]. The name means ‘box’ in Spanish and was applied in Spanish America for canyons boxed in by hills or cliffs. Mentioned as early as 1821 as the name of a rancho of Mission San Diego.

Enchanto, en-kan’-toh [San Diego]. The Spanish word for ‘enchantment’ was applied to the post office in the 1890’s.

Encinitas, en-si-nee’-tas [San Diego]. Settled in the 1880’s and named after Cañada de los Encinitos (valley of the little oaks), recorded in 1839. Encina (live oak) and its diminutive, encinita, are frequent in California place names.

Escondido, es-kon-dee’-doh [San Diego]. The Spanish word for ‘hidden’ was applied to the subdivision in 1885. There are four Escondido Creeks in southern counties.

Estero, es-teh’-roh. The Spanish word for inlet or estuary is frequently found along the ocean shore.

La Jolla, hoy’-a [San Diego]. The word, also spelled Joya or Hoya (hollow, cavity, pit, or river bed), is a Mexican geographical term, repeatedly found in Spanish California documents and maps. The name in San Diego County was probably first applied to a hollow, or to a rancheria ‘in the hollow’; it appears in mission and land-grant records since 1828, and was applied to the town in 1869.

Las Flores. The Spanish name, ‘the flowers,’ was repeatedly used in Spanish times and is preserved in Tehama, San Diego, and Los Angeles counties.

Leucadia [San Diego]. The name of one of the Ionian Islands was given to the town by English settlers in 1885.

Lindo, Linda. The Spanish adjectives for ‘pretty’ is repeatedly found in place names. Linda [Yuba], however, was named in 1850 after the first steamer launched on Sacramento River.

Loma, Lomita. The Spanish word for ‘low hill’ and its diminutive form are still actively used, often without regard to meaning, for mountains as well as subdivisions.

Mesa, may’-sa. The Spanish word for a flat-topped hill is generally used in the American southwest but it has not replaced the corresponding English ‘table hill.’ There are more than twenty mesas in the state, together with a number of towns so named: Las Mesa, Mesa Grande, Mesaville.

Monte. The word means ‘grove,’ ‘thicket,’ or ‘woods’ in Spanish and is sometimes used to form pleasant-sounding but ungrammatical combinations for place names, like Monte Rio, Monte Vista, Miramonte. Although Spanish dictionaries list monte aso with the meaning ‘mountain,’ it has rarely if ever been used as a geographical term with that meaning in Spanish-speaking countries.

National City [San Diego]. Named in 1868 after the Rancho de la Nacion, on which the town was laid out. Until Mexican independence (1822) it had been called Rancho del Rey (the king’s ranch).

Ocotillo [San Diego]. Named for the cactus-like plant. The name is derived from the Aztec root meaning ‘prickly.’

Pala, pah’-lah [San Diego]. The place, probably a rancheria, is mentioned in 1781. The name may mean ‘water’ in Luiseño Shoshonean Indian.

Palm. The many place names containing the word were applied because of the occurrence of the native Washington palm or the Joshua palm.

Palomar Mountain [San Diego]. The name, ‘place of the pigeons,’ was used in Mexican times and revived in 1901 after the mountain had been called Smith Mountain for many years.

Playa. The Spanish term for ‘beach’ and ‘dry lake bed’ was frequently used in Spanish and Mexican times and is now popular for resorts and subdivisions. Pronunciation varies according to locality: ply’-yah, ply’-ah, play’-a.

Ramona [San Diego]. The name was given to this community (and several others) in the late 1880’s when Helen Hunt Jackson’s novel was at the height of its popularity.

Rancho. Unless otherwise stated, a rancho is a farm developed on a land grant.

Rancho Santa Fe [San Diego]. In 1906 the Santa Fe developed the San Dieguito Rancho as an experimental station for growing eucalyptus trees; in 1927 the ranch was sold for subdivision but the name Santa Fe was retained.

San Dieguito Valley [San Diego]. The Spanish name of Saint James the Less, one of the Twelve Apostles. The arroyo [San Dieguito River] and the site of San Dieguillo were mentioned by Padre Pedro Font on January 10, 1776. A rancheria named San Dieguito was mentioned in 1778, and the name was applied to a land grant in the early 1840’s.

San Elijo Lagoon [San Diego]. A camping place of the Portolá expedition was called San Alejo on July 16, 1769, obviously for Saint Alexius, whose feast day is July 17. Later, the name shifted southward and was applied to the lagoon.

San Onofre, o’-no-fre [San Diego]. The name of the Egyptian hermit, Saint Onuphrius, was mentioned for a mission rancho in 1828, and was applied to a land grant in 1836.

Santa Margarita [San Diego]. The valley was named by the Portolá expedition on July 20, 1769, because it was the day of holy Margaret of Antioch. In 1836 the name was used for a land grant and later for the river and the mountains.

Santa Ysabel [San Diego]. The name probably honoring Saint Elizabeth, Queen of Portugal, was mentioned in 1818; in 1821 Mission San Diego established an asistencia there. In 1844 the name was applied to a land grant, and in 1875 to the Indian Reservation.

San Ysidro, ee-see’-droh [San Diego]. The name of Saint Isidore, of the 7th century, given to the mountain and an Indian rancheria in Spanish times, was applied to the town in 1909.

Soledad, sol’-e-dad. The Spanish word for ‘solitude’ was repeatedly used for place names and has survived in several localities. The names in San Diego County go back to an Indian rancheria, so named in 1776.

Temecula, te-mek’-yoo-la [San Diego, Riverside]. An Indian rancheria was mentioned as Temeca in 1797 and as Temecula in 1820. Temet is ‘sun’ in Luiseño Indian.

Tia Juana, tee’-a wah’-na [San Diego]. Doubtless an Indian name, recorded after 1829 and usually spelled Tiajuan, though the names even in Mexican times was changed by folk etymology to Tia Juana (Aunt Jane).

Vallecito. The Spanish for ‘little valley’ is preserved in place names in San Diego, San Benito, and Calaveras counties.

Vista [San Diego]. When the Santa Fe built across the old Buena Vista (good view) Rancho in 1890 it name one station Buena Vista. When in 1908 a name was needed for another station, the old one was called Buena and the new one Vista. 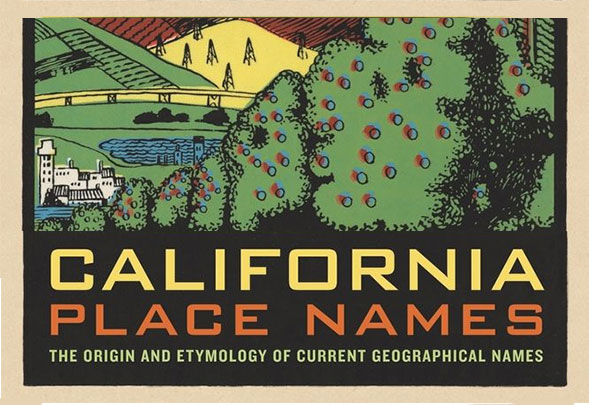