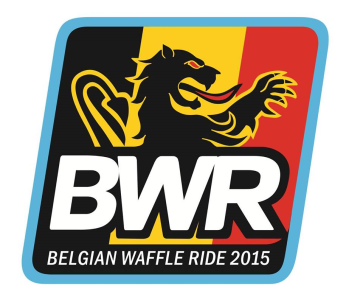 San Diego-based eyewear brand SPY® is back to serve up the fourth edition of their unique and extremely challenging spring classic cycling event, the SPY Belgian Waffle Ride (BWR), on April 26. In addition, they’re adding a new, shorter, and only half as painful SPY Belgian Wafer Ride, as well as a the expanded BWR Lifestyle and Fitness Expo, hosted by The Lost Abbey Brewery in San Marcos, Calif.

Returning in true Belgian fashion, the BWR—complete with moules-frites, Lost Abbey ale, waffles, and more Lost Abbey ale—punishes worthy entrants with a 225-kilometer cycling route split roughly into two 112-kilometer loops with 11,000 feet of undulating climbing through the unrelenting hills of San Diego County. The majority of the competitors take on the ride using road bikes, but it’s not uncommon to occasionally see a cyclo-cross bike or even an Elliptigo. 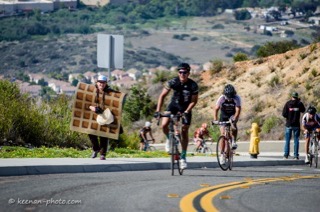 “The SPY Belgian Waffle Ride began as a homage to the storied history of bike racing in Belgium—a place long considered to be the epicenter of international professional cycling,” says Michael Marckx, SPY president, CEO, and creator of the event. “A tribute to the beautiful—and equally grueling—races staged in Belgium during the early spring, this year’s route is different than all of the previous years with different gravel, dirt, and rocky sections, and more climbing than rural Belgium could offer, promising more fun, more pain and more opportunity for excuses than ever before. We promise at least 14 dirt sections, more than 11,000 feet of climbing and headwinds no matter which direction you ride.”

The fourth annual fete will mark the largest cycling extravaganza in SPY Belgian Waffle Ride history, and is staged to attract 1000 of the best of the biking community, including Olympians; World, National and State champions; professional and amateur cyclists; and surf, motocross and bike industry luminaries. 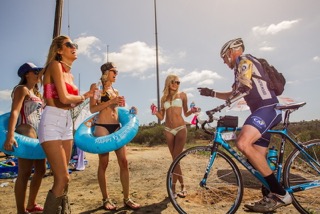 Similar to last year, the festivities around the Belgian Waffle Ride begin a day before the race with a Lifestyle and Fitness Expo, on Saturday, April 25 at The Lost Abbey brewery. Open to the public, the expo will feature a variety of craft beers created to reflect the monastic brewing traditions of Belgium. During the expo, attendees and racers can peruse the offerings from event sponsors and other exhibitors.

“We’re excited to partner again with our friends at the Lost Abbey, who will be hosting the start of the ride, the finish and BWR’s expanded two-day expo. We plan to do live-streaming of the event and the post-race antics online for those that can’t make it to the Lost Abbey that weekend,” adds Marckx. “Keeping up with tradition, we will continue to support the Challenged Athletes Foundation® and accomplish the task of consuming massive piles of Belgian waffles alongside a frosty glass of Lost Abbey Belgian Waffle Ride Bad Ass Ale.”

Details On The BWR Weekend Events And Race Start 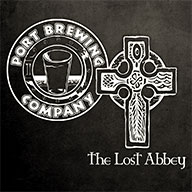 On April 25, one day prior, The Lost Abbey hosted Lifestyle and Fitness Expo run from noon to 5:00 pm and on Sunday, 6:30 am until the end of the race. Racers can pick-up their entry packets during Expo hours Saturday or before the race on Sunday. The Expo will remain open on Sunday throughout the duration of the event until beers, jeers and awards are distributed for heroic efforts and lack-thereof.

Race day events kicks-off at The Lost Abbey at 6:30 am on Sunday, April 26, with a catered breakfast for the participants, replete with fuel-sized portions of authentic Belgian waffles.

The pain-promising Waffle Ride will ensue at 8:00 am, while the Wafer riders will roll out starting at 9:00 am.

Wafflers will contend for a variety of awards, including the kUDOs award—an accolade in memoriam of Udo Heinz, a fallen cyclist, husband, and father of two who was struck and killed near Camp Pendleton in 2013. Remembered for his vigor on the bike and in life, the kUDOs award will be presented to the rider who exudes the most heart—a happy vitality—on course.

Custom-made jerseys, designed by Joe Yule of StageOne, will go to other top female and male riders in the event, including:

Registration: Entry Fee is $125 for the 140 mile Belgian Waffle Ride and $100 for the less taxing, 70 mile Belgian Wafer ride. Registration is available online at www.bikereg.com/spybwr. Registered SPY Belgian Waffle and Wafer Riders will help support the event’s cause, the Challenged Athletes Foundation® (CAF), whose mission is to provide opportunities and support to people with physical challenges so they can pursue active lifestyles through physical fitness and competitive athletics. Additional sponsors include Giant Bicycles, RIDE Cyclery, GQ-6, True Dentistry, Stage One, SRAM and Zipp.

SPY® sponsors some of the nation’s most important cycling competitions and series including the SPY Belgian Waffle Ride, Crusher in the Tushar, Chino Grinder, Red Trolley Criterium, Orange County Cycling Classic, Adrenaline Cycling Promotions and Quick n Dirty MTB events. The brand sponsors some of the world’s most inspiring athletes, ranging from Olympic snowboarders to professional surfers and a host of noted amaterur and professional cycling champions. The SPY brand was born in the early 1990s on the idea that you can be innovative, technical and all about victory, but not look like a fool. SPY is the only eyewear brand to have the patent-pending Happy Lens™ technology, the only color and contrast enhancing lens design that can help foster a positive uplift in mood and alertness by maximizing the transmission of long-wave blue light to the eye, while at the same time blocking the suns harmful rays. More information on the Happy Lens is available at http://www.spyoptic.com/happy/.

About the Challenged Athletes Foundation: 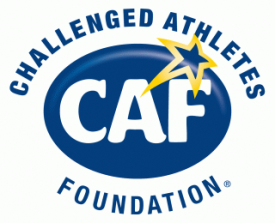 The Challenged Athletes Foundation® (CAF) is a world leader in helping people with physical challenges lead active, healthy lifestyles. CAF believes that participation in physical activity at any level increases self-esteem, encourages independence and enhances quality of life. Since 1994, more than $60 million has been raised and over 9,500 funding requests from people with physical challenges in all 50 states and dozens of countries have been satisfied. Additionally, CAF’s outreach efforts reach another 60,000 individuals each year. Whether it’s a $2,500 grant for a handcycle, helping underwrite a carbon fiber running foot not covered by insurance, or arranging enthusiastic encouragement from a mentor who has triumphed over a similar challenge, CAF’s mission is clear: give opportunities and support to those with the desire to live active, athletic lifestyles. To learn more, visit challengedathletes.org or call 858-866-0959.